Kinesio tape and shoulder pain: Is it worth the hype? 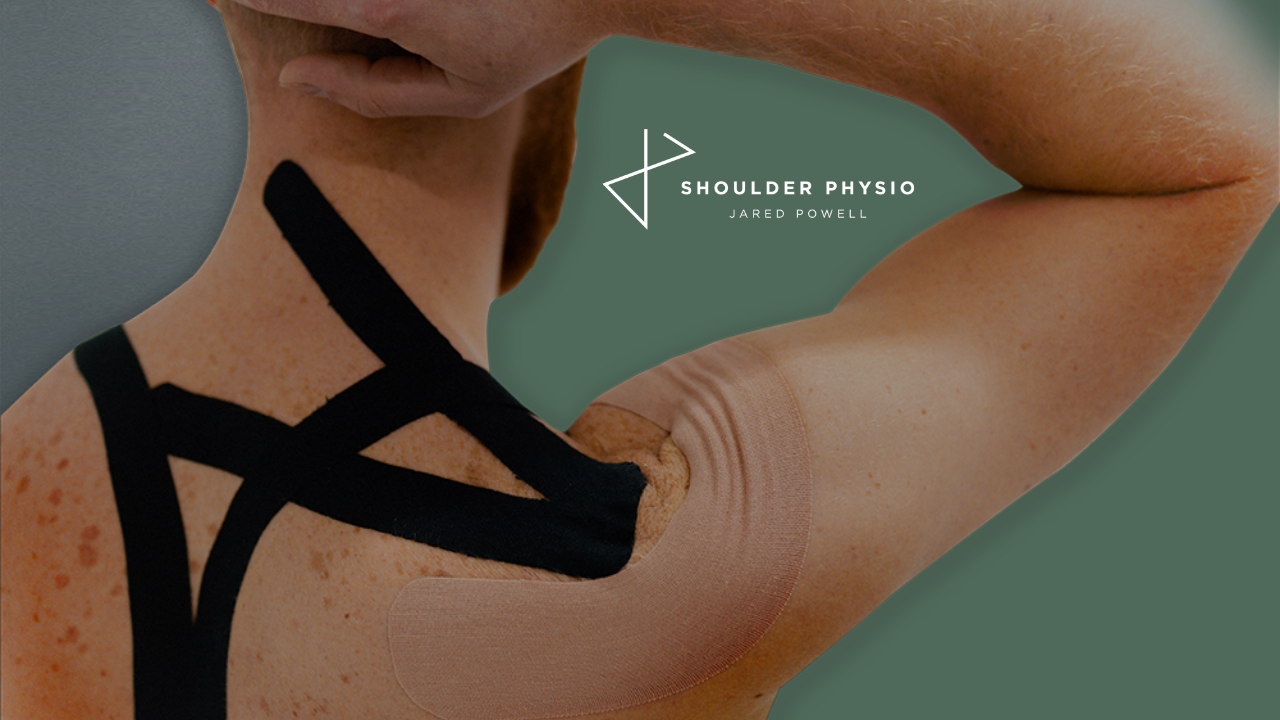 Hi. Have you ever pondered on the effectiveness of K-tape for shoulder pain? If so, you're not alone. In response to growing suspicion from discerning clinicians surrounding the efficacy and effectiveness of this colourful intervention, a recent randomised controlled trial (ref) has attempted to provide clarity on the topic. Read on for results...

Has found widespread popularity and validation via effective marketing and promotion through the use of world famous athletes. The Beijing 2008 and London 2012 Olympics are now famous for being kinesiotape's "coming out" party and rumour has it it's founder, Kenzo Kase (a Japanese Chiro and Acupuncturist), donated 6000 feet of K-tape to various national Olympic committees before London 2012. Genius.

Taping, in a variety of forms, has been embedded within physiotherapy practice for decades. Whether it be;

Furthermore, if you've ever worked with a sports team or indeed played a sport, you will know how culturally entrenched tape truly is, from patients clinicians alike. Like the special liniment oil that magically fixes pain or stiffness, the tape is probably here to stay, but does it deserve to?

The past decade has seen the emergence of a new tape player, K-tape (see a brief history above). K-tape is a challenger to the boring and beige rigid tape and I must confess it looks pretty cool. I remember training as a physio 10 years ago and recall an actual K-tape employee coming to talk to our cohort to provide a demonstration of how to use the tape and explain its apparent mechanism of action. Bravo to the marketing department at K-tape! Get the impressionable students!

So what is the supposed mechanism of action of K-tape? What does it claim to do?

And specifically for the shoulder;

Evaluate the mid and long term effects of K-tape, added to a 6-week rehab program, on shoulder pain and function.

K-tape will achieve faster improvements in pain and function compared to individuals not exposed to K-tape and that individuals receiving K-tape would display a greater increase in pain-free ROM and acromiohumeral distance at the end of the study.

The rehab program had a focus on sensorimotor training of the shoulder (hmmm) and also some low load resistance exercise. There was no significant difference between the control (no K-tape) and experimental group (K-tape) for any outcome at any time point up to 6 months.

The study hypothesis was not confirmed.

Both groups improved significantly from baseline to 3 and 6-week follow-up, after which improvement plateaued.

Results are in alignment with a 2020 systematic review which reported there is insufficient evidence to support the use of K-tape in clinical practice for any type of shoulder pain (subacromial shoulder pain included) (ref).

An interesting result, which really makes me smile, is that acromiohumeral distance did not significantly change over time in either group but pain and function improved in both groups. This further challenges the concept of "subacromial impingement" via superior translation of the humeral head during arm elevation as being a factor of any profound importance in the emergence of shoulder pain.

It is also worth mentioning that there was not an obvious placebo effect with the use of K-tape, or if there was it didn't affect outcomes relative to the control group. It would be interesting to take this further, by asking people "what are your expectations of K-tape"? If they had positive expectations (or negative), was this associated with better (or worse) outcomes? Someone do this study please. Thank you. This RCT challenges the effectiveness of adding K-tape to a generic rehab regimen in people with subacromial shoulder pain. It doesn't seem to manifestly influence outcomes. It must also be said there is no harm in using K-tape.

So if you regularly use K-tape in your clinical practise, this RCT doesn't say to cease and desist, nor does it promote its use. As always, it depends on patient and clinician values and if someone really, really wants some colourful tape applied to them because it has "helped" in the past, I see no benefit in talking them out of it for the sake of being stickler for the evidence (I'm sure some will disagree). Conversely, you are not withholding anything from your patients by not enthusiastically slapping tape on everyone who walks through the door.

The exercise regimen, and of course contextual effects of seeing a physio and non-specific effects, are probably what moves the needle the most for people with subacromial shoulder pain. So if you stick to the principles of appropriate and individualised exercise prescription, active listening, reassurance, modern and accurate education, and setting appropriate expectations of recovery you will likely help the vast majority of lucky patients who get to see you. Everything else can be viewed as an adjunct and mostly surplus to requirements.

Chat to you again next month :)

You''ll be happy to know, There is no taping covered in my online course. Just simple, scientific and effective stuff :) See here