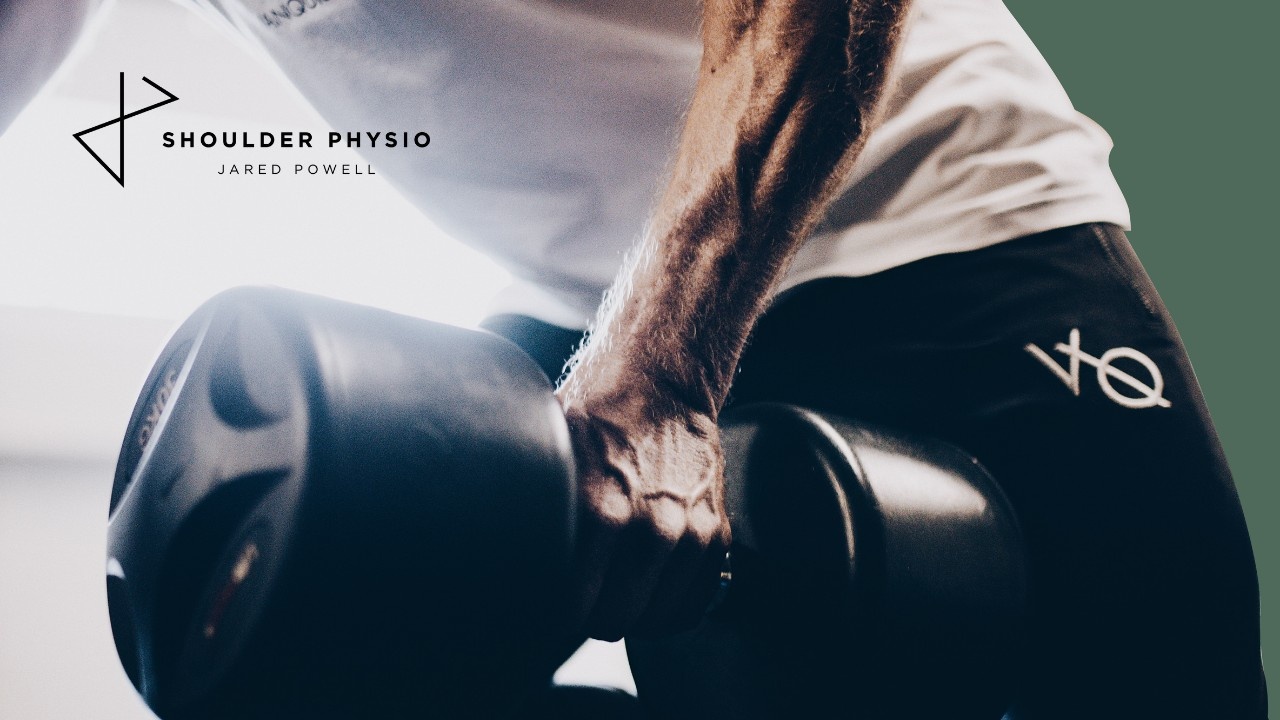 Okay, so you made it through instalment 1? I will pretend that was a universal resounding yes! (if not, click here).

The focus of this instalment will move away from subjective examination and focus on objective examination and differential diagnosis. Frozen shoulder IS a clinical diagnosis, so it is vital you are able to distinguish between a painful shoulder of rotator cuff (etc.) origin and a painful shoulder that is being driven by the complex pathophysiology of frozen shoulder. Correct and timely diagnosis, therefore, leads to timely and accurate intervention.

Important subjective information manifested in the patient interview must then be tested in the physical examination. As there is no definitive gold standard test to diagnose FS (3) the clinical examination becomes an integral component of the battery of diagnostic tests available (see diagnosis section). Zuckerman and Rokito 2011 state FS is a condition characterized by functional restriction of both active and passive shoulder motion for which radiographs of the glenohumeral joint are unremarkable except for humeral head osteopenia and possible calcific tendinopathy (13). The essentially normal radiograph and the equal restriction of active and passive ROM here will help differentiate from other painful shoulder syndromes.

The restriction in shoulder ROM was originally thought to follow a firm capsular pattern with external rotation being most affected (34), however, this has not been consistently seen in objective testing. Rundquist et al 2003 has reported that whilst external rotation both in neutral and abducted to 90 degrees is consistently reduced in people with FS, internal rotation is often most affected, especially when the arm is abducted closer to 90 degrees (35). It has also been proposed that the shoulder capsule is not the only structure that restricts shoulder ROM. It might be important to consider muscle tightness/contracture and true joint stiffness (glenohumeral joint osteoarthritis) (35,36). Despite the lack of clarity regarding which movement is predominately affected, an equal restriction of active range of motion (AROM) and passive range of motion (PROM) is the key information that should be gleaned from the physical examination.

Manual muscle testing has historically been considered within normal limits and essentially pain free in those with FS (34). However, others have described deficits of internal and external rotation strength in people with FS (37). People with FS also exhibit increased EMG activity of the upper trapezius relative to lower trapezius compared to healthy controls (38). This can lead to the ‘shrug sign’ where the position of the scapula may change leading to the appearance of a sustained shoulder shrug (35,39).

Carbone et al 2010 has described the coracoid pain test as being an important clinical test in FS. Painful palpation of the coracoid process was reported to be a widely present feature in FS and is a clinical test that may be considered as part of physical examination tests that may support the clinician’s clinical decision making that the individual has a FS (20). Further research is required to better understand the importance of this test.

Neurological testing should be normal with no neural compromise being a feature of FS. Although, as with any persistent pain presentation, there may be a central sensitization component to FS that may result in allodynia or hyperalgesia that shoulder be screened as part of the physical examination with generic sensory testing. However, it is essential for clinicians to appreciate that the individual may have more than one condition and as such must always be vigilant for overlapping or concomitant presentations and co-morbidities.

There is NO gold standard test for the diagnosis of FS. Bunker 2009 describes a simple diagnostic criterion for FS; an equal restriction of active and passive glenohumeral external rotation and an essentially normal shoulder radiograph (40,13).

Special tests designed to provoke the rotator cuff, glenoid labrum, AC joint and other shoulder structures are rarely helpful as they will almost always be positive as a consequence of taking the sensitized frozen shoulder into positions that will stress the capsulo-ligamentous complex (23).

No blood tests to confirm the presence of FS is available, however may assist in developing a causal relationship between diabetes or hypothyroidism.

In relation to imaging, radiographs are typically normal and can help to exclude osteoarthritis, locked dislocation or sinister pathology as a cause of pain (3). Arthrography has been used to determine a reduced intra-articular volume in a FS cohort compared to a control group (41).

Yoon et al 2017 argued that MRI can identify characteristic patho-anatomical features associated with FS, such as greater thickening and enhancement of the capsule and axillary recess and greater thickening of the soft tissue of the rotator interval. However, it was deemed the MRI findings were not relevant or able to predict prognosis or severity of symptoms (43). Therefore, whilst MRI may be helpful in identifying consistent patho-anatomical structures, it is not necessary in the diagnosis of FS.

Similarly, Lee et al 2005 published findings suggesting ultrasonography correlates well with arthroscopic findings of FS. They found a combination of enhanced vascularity and hypoechoic change around the rotator interval is a significant sonographic finding associated with FS (44). Homsi et al 2006 reported a consistently thickened coracohumeral ligament was a feature in people with FS using ultrasonography (45). More recently, Michelin et al 2013 reported the thickness of the inferior glenohumeral capsule is measurable using ultrasound and appears to be increased in a cohort of people with FS (46). Finally, contrast enhanced ultrasonography has been shown to demonstrate capsular inflammation in a way that is comparable to MRI (47). Further research is required to better understand the role and importance of imaging in the diagnosis of FS.

Differential diagnosis is important in the correct identification of FS. There are a number of conditions that can cause shoulder pain and some can masquerade as FS. See the table below for a list of the most common shoulder pathologies that need to be ruled when considering a FS diagnosis.

Frozen shoulder can also be associated with sinister pathology. Therefore, it is essential to be vigilant in identifying any possible red flags. Be aware if there is a history of cancer, unexplained weight loss, or an unexplained deformity or mass. Does the skin appear normal? Has the person been systemically unwell recently or is there pain elsewhere in the body? Has there been a history of trauma to the shoulder, in which case an unreduced dislocation or fracture must be ruled out. Is there a neurological lesion causing significant motor or sensory deficits to the shoulder? (49).

If a clinician is suspicious of any these symptoms then an immediate referral to hospital emergency department or doctor must be made. A clinician must remain vigilant for red flags during all consultations. On a final note, just to get your mind boggling, is there such a thing as pseudo frozen shoulder? This was suggested by Hollmann et al 2018, who revealed some patients with a frozen shoulder demonstrate significant improvements in ROM when under general anaesthesia Vs awake. See the picture below. This raised the question, is there an active restriction of ROM in a proportion of people with frozen shoulder? What could this be due to? Can we differentiate these people from those with true capsular restriction clinically? These questions are yet to be answered, BUT, if an active restriction exists in some, it points directly to active management as the intervention of choice. This is great for physical therapy! 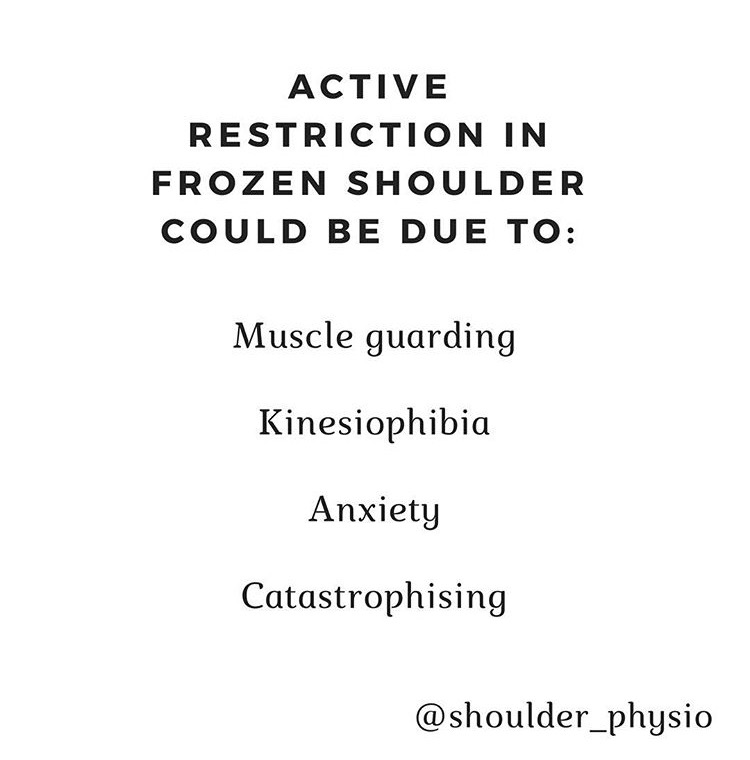 Okay that brings this month's review to a close. We have successfully covered subjective and objective examination, and also differential diagnosis. We now proceed to treatment! Coming June, 2019.