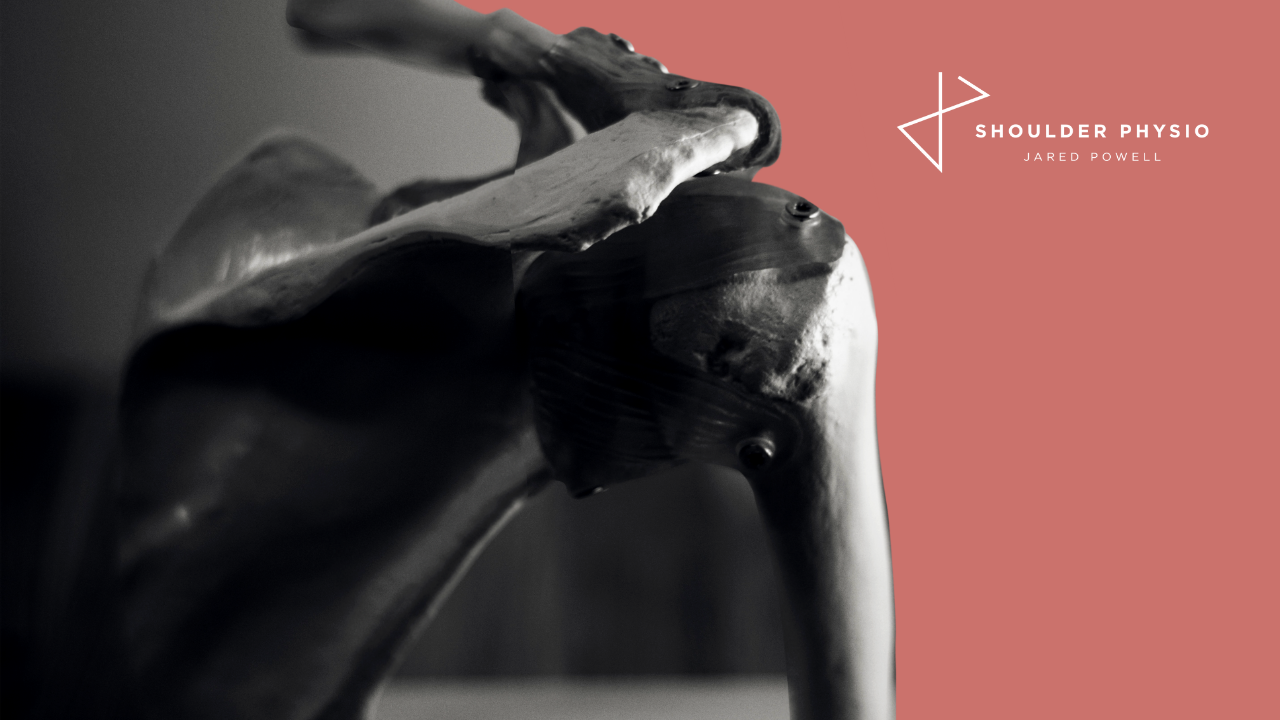 Welcome back. This month we tackle the question; does preseason screening of shoulder ROM variables help predict future shoulder injuries in overhead athletes? This review is based on a recent systematic review and meta-analysis from Pozzi et al 2020.

The infamous Glenohumeral Internal Rotation Deficit). Typically measured as a loss of shoulder IR on dominant arm Vs non-dominant arm. There is large variation in the literature of what is a "normal" GIRD Vs a "pathological" GIRD. Total rotation ROM (ER + IR) is typically the way I like to measure if a GIRD is present. I look for there to be a corresponding relative equal increase in ER to make up for lack of IR, resulting in symmetrical (ish) total rotation ROM from side to side. If total rotation is out by more than 5 degrees with IR loss of more than 20 degrees this is deemed pathologic GIRD.

*Not to mention that many GIRD presentations are the result of humeral retroversion! (not for discussion today).

I don’t know about you, but throughout my physio training, both at university and also in my early years as a new graduate, it was drilled into me that when treating overhead or throwing athletes, you need to look for certain mechanical variables within the shoulder complex, including;

My thought was, if any of the aforementioned factors were present, absent or aberrant I must "normalise", or the athlete will get injured and it will be all my fault! This made sense. Of course overhead athletes need to have perfect kinematics of the shoulder, that’s why they’re at the top of their game, because they’re perfect specimens, right!? Well let’s take a look at the evidence.

Before we get into it, notice anything about the above factors? They’re all intrinsic…and can supposedly be modified through intervention (through the magic hands of clinicians). There was barely any mention of load at this point (Tim Gabbett was not the tour de force he is now) apart from the cursory “just ease back into it” sentence we used to mutter to athletes after injury. There was certainly no mention of emotional health, coping skills, sleep, and stress levels that are all the rage these days (remember this was 10 years ago – and just look how far we’ve come). Strength was predominately tested using manual muscles tests and were pretty much used for pain provocation purposes, not actually testing force output. Exercises had to be specific to throwing athletes, general strength and conditioning was seen (mostly) as a waste of time. Injury was perceived as a linear phenomenon that resulted from improper biomechanics, hence our role at detecting and correcting this prior to competition. My world came crashing down pretty quickly when injuries began to occur in athletes with perfect biomechanics, and, conversely, athletes with sloppy (technical term) form occasionally turned out to be the most resilient! Something was up.

After a systematic review of the literature, 3314 overhead athletes were identified. 75% of these athletes were baseball players; the remaining came from:

Males were by far the most represented sex with females only making up 12% of the cohort. Please consider this when applying results.

Most studies followed athletes for one competitive season and some for multiple seasons, which provides a nice longitudinal component to this review.

Overall the shoulder and elbow injury rate per sport was:

Preseason shoulder ROM for all domains (as listed above) was not able to accurately determine who was at risk of developing a shoulder or elbow injury and the hypothesis was not confirmed.

WAIT, there may be more to it (depending on the sport the athlete is participating in).

The risk of shoulder and elbow injuries nearly doubled when professional baseball players did not have at least 5 degrees GREATER shoulder external rotation on their throwing arm Vs non-throwing arm. This corroborates the point that greater ER in baseball players is likely advantageous for preventing shoulder and elbow injuries. However, it remains to be seen whether we can appreciably improve this variable through manual or physical intervention. There are a number of reasons why ER is greater in throwing athletes, some of which are not modifiable, for example humeral retroversion (which may be protective of shoulder injuries in throwing athletes) (ref).

Of interest, this ER association was not found in junior baseball players, meaning larger ER ROM may be adaptive and occur through use over several years (BIOPLASTICITY).

There does not appear to be an association between reduced side to side internal rotation ROM of greater than 20 degrees and increased shoulder or elbow injury risk. This is essentially the clinical syndrome of GIRD. There does not appear to be any evidence for arbitrary stretching of the peri-shoulder muscles in the vague hope of normalising shoulder internal rotation ROM and in fact in some studies this led to a higher injury risk (ref). The aim here should be to get as close as you can to 180 degrees of total GHJ rotation.

A reduction of shoulder flexion was not associated with increased injury risk for the shoulder.

There is inconsistent evidence regarding the association between horizontal adduction ROM deficits and shoulder injury risk in baseball players.

There is conflicting evidence that deficits in total rotation ROM and ER and IR measures lead to increased injury risk for the shoulder and elbow.

There seems to be a sweet spot of shoulder ER in swimmers. Shoulder ER ROM that is less than 93 degrees and higher than 100 degrees are at a higher risk of shoulder injuries than if their ER ROM was between 93-100 degrees.

There was no association between absolute shoulder ROM and ROM deficits in softball players, volleyball or tennis players and shoulder or elbow injury.

Does not include information for weight lifters, boxers, gymnastics etc.

It appears preseason measurement of absolute shoulder ROM and side to side deficits may be of limited use in predicting future shoulder (or elbow injuries). With the exception of ER in baseball and swimming, as discussed above.

What to make of this? In some ways, I’m slightly surprised. My bias has been that elite athletes require exceptional biomechanics due to the high loads their tissue is frequently subjected to. But, as I sit here and reflect, there are high profile examples, in many sports, of high performers with perfectly imperfect biomechanics (Tom Brady was deemed to small and slow with a bad arm and yet has become the most resilient NFL athlete ever, Usain Bolt has scoliosis and did okay, and up and coming golfer, Matthew Wolff, has a swing that is ridiculed by his peers and fans and yet is the hottest young golfer in the world). What this reiterates to me is the non-linearity of injury (ref). Athletes, like all humans, are non-linear and dynamic systems. The health of a biological system is dependent on a number of interdependent physical and non-physical factors that can disrupt the balance (allostasis) of an individual. It seems reductionist to think a single physical test, or even a cluster of physical tests, can accurately predict future injury in a system at the mercy of multiple influences across multiple fronts. It appears to me that injury/pain is probably the end result of a number of interacting factors intrinsic to the athlete and extrinsically in the environment, for example:

These factors (and many more) all interact with each other to produce an injury risk for a particular individual at a particular moment in time. By viewing a person through a linear and reductionist lens, focusing on physical findings inordinately more than other factors, we fall into the trap of simplifying pain and injury. Furthermore, athlete monitoring SHOULD be performed frequently throughout the season, not simply at the start of a season with reassessment at the end of the season. When conducted more frequently we may be able to capture more accurately subtle changes in any of the above factors that can influence the onset of the injury. Usain Bolt and his scoliosis. I don't need to elaborate on the success Usain enjoyed despite his crooked spine. Matthew Wolff displaying his "imperfect" golf technique that has seen him become one of the hottest young golfers on the planet.

Assessing shoulder ROM is but one of a number of factors that may lead to a comprehensive profile of whether an athlete may be at a higher risk of developing a shoulder injury. Does this mean assessing ROM is redundant? No. it simply means it cannot be exclusively relied upon. For baseball and swimming, there is good evidence that ER ROM should be screened and optimised, as able. It seems prudent to view an athlete as a non-linear, dynamic system with many moving parts that can influence the onset of the injury. Consider the full spectrum of the injury experience when trying to determine injury risk. Remember athletes are not cars, and we are not mechanics.

Thanks for reading. Check out previous literature reviews here.